In his statement to the Phillips inquiry Richard Packer was asked why he did not put contingency plans in place to protect human health from BSE.

He replied: “The case of BSE in late 1995 early 1996 was quite different. Most of the potential scientific facts were (and many still remain) unknown.”

Yet as far back as October 1988 BSE was transmitted to mice following the inoculation of infected brain tissue. Two months later BSE was officially-designated as a ‘zoonosis ‘ – a disease which can be passed from animals to humans.

Richard Packer trained as a scientist at Manchester University. His position as Permanent Secretary gave him access to information at the highest level . His early career centred on the agricultural and fishing policies of the European Union and he had a thorough understanding of the UK’s beef trade and its value to exporters. I find it utterly amazing that a man of Packer ‘ s experience and intelligence could come up with such an excuse.
Richard Packer continued his statement to the BSE Inquiry by declaring that if he had put in place contingency plans to deal with BSE transmission to humans then “economic capital could be destroyed, possibly for no reason”. My son Andy’s life and future was destroyed instead. 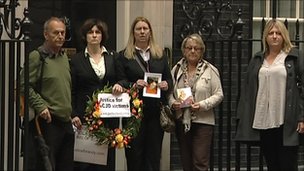 Families affected by Human BSE outside Number 10 Downing Street, we have been banned from going inside and meeting the Prime Minister.

Richard Packer was the youngest-ever Permanent Secretary in MAFF. In his book “The Politics of BSE” (hardcover £50) Packer admits that he was “not above using subterfuge to help his political master, whoever it was.” (The Guardian Review June 3rd 2006).

As the title of his book suggests, for many people, BSE and the tragedy of vCJD was about politics. Scientists and officials sought to promote, then rescue, their careers. Politicians sought to protect their parties. Civil Servants sought to keep the wheels of Whitehall moving. The victims were young people, like my Andy.

The Phillips report criticised Richard Packer for not devoting more time to devising further anti-BSE controls, but like most of Whitehall he argued that the Treasury would “not have agreed” to safeguards that ran into billions of pounds.

For me, Packer’s statement and lame excuses show that the Government wasn’t prepared to put profits at risk in order to safeguard lives. One of those lives belonged to my son Andy who would die at just 24 years of age.

In a recent article in a national newspaper Richard Packer is  exposed as being  ‘responsible for the outbreak of Mad Cow Disease in theUK.

An aide of Ex Prime Minister Tony Blair  stated in the The Mail on Sunday April 21st 2013 that: ‘the Government was forced to give a £1 million payoff to the official who was to ‘blame for the mad cow disease’ crisis in the early days of Mr. Blair’s Premiership.’  That government official was Richard Packer, see link to article below.

As Andy’s mum, I find it an insult that an official at the heart of the BSE scandal can admit, in his book, that he used subterfuge to support his masters. Worse still, he uses his book to exonerate himself from any responsibility, and in a self-congratulatory tone concludes that: “Outside the beef sector, the effects of the BSE crisis or crises have been limited and such lessons that might be drawn from them are obvious.“ 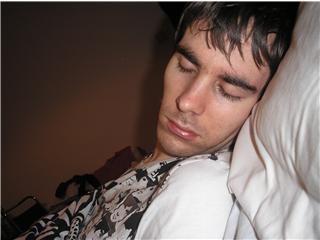 I read those words while sitting in my Andy’s empty bedroom, his favourite Converse shoes under his bed, his designer-clothes in his wardrobe, my home echoing with the emptiness of his immeasurable loss. Andy – at 24 – has been cheated out of at least fifty years of life, love, smiles and laughter. He never bought his first home, never married or had the chance of a family. He was too young to even get cheap car insurance and was still using spot cream for his acne…As I read those trite dismissive word s in the book’s closing chapter, I wept, heart-broken at the value Richard Packer and the Government put on human life, and death. My son’s life. My son’s death.

When Richard Packer ‘s book was published in the late spring of 2006 Andy was freelancing. At the weekend he was night-clubbing with his friends in Manchester and Birmingham. He was also starting to loose weight, one of the first signs that the incubation period was over. Within eighteen months my beloved only son would be dead from vCJD .

In 2001 Richard Packer was knighted. He is a non – executive director of Arla , the UK’s largest dairy company. He is married with seven children.