On the 12th May 2010, Kenneth Clarke was appointed Lord Chancellor and Head of the Justice Department in the new Prime Minister David Cameron’s coalition government. As a mother who has lost a child unlawfully to vCJD, I am appalled at this appointment and have written to Clarke, Cameron and Clegg demanding Clarke’s resignation. Kenneth Clarke is now in charge of the courts, law making, freedom of information, prisons and his role is seen as strengthening democracy and human rights.

In his speech during the acceptance of his role as Lord Chancellor Clarke said his job was to ‘promote fairness liberty and the public interest’. The hypocrisy of those statements are like barbs to my broken heart.

Where is the justice in this reward and appointment? When during his time as Health Secretary 1988-1990 and Health Minster 1982-1985 Clarke allowed MRM the most infectious part of a BSE infected cow hourly and for years into the food chain. He didn’t stop MRM going into baby food until 1988, Cow and Gate tell me that MRM was put in its baby food jars from 1983-1988,( this means thousands of UK babies and infants were exposed to BSE and its lethal pathogen vCJD) many of those young babies became teenage victims of vCJD. As Health Minister who would condone putting cow’s brains, spinal cords and the parts of an animal in baby food that is usually binned, Clarke did as there was lots of money to be made for the Beef Industry and shareholders. 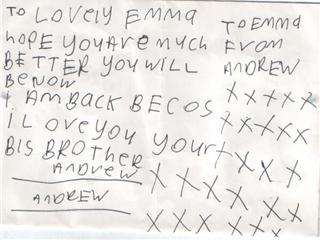 Letter written to Emma when she was suffering from chicken pox from her big brother Andrew returning from a holiday with his grandparents.

Clarke refused to stop the production of MRM ( which was in the human food chain to at least 1997) and condoned and allowed it to be used in school meals, feeding the elderly in nursing homes, hospital food, armed forces and for students at college and University. As Secretary and Head of the Department of Health who was warned repeatedly abut the lethal risks that BSE held for human health he is culpable and criminally responsible. So how can he sit at the head of the justice department in the UK?Andrews last few days

Clarke. Also condoned, encouraged and allowed BSE infected herds to be used in the process and manufacture of vaccines. This man is culpable for hundreds of deaths and has left us all with a ticking health time bomb. Kenneth Clarke with those others named and shamed on this website hold the ‘smoking gun that unlawfully killed my Andrew’ how can Clarke be in charge of the justice department when so much blood is on his hands? I have asked Cameron and Clegg not to return to the politics of the 1980s and 1990s that culture of secrecy; cover-up and corruption killed my only son and all victims of vCJD. I have also asked them not to reward wrongdoing and for them to support me, the campaign and the public when we demand transparency, justice, responsibility and accountability and that must start with Kenneth Clarke’s resignation. Other wise democracy has died….

Kenneth Clarke was appointed to the cabinet and in May 2010 was made Lord Chancellor and Secretary of State for Justice.

On 4th September 2012, Clarke was demoted and moved from his role as Justice Secretary, to Minister ‘ without portfolio’, but he still retains his grip over the government and advises the Prime Minister regarding significant policy issues.

Kenneth Clarke, John Gummer and Leon Brittain were known as the ‘Cambridge Mafia’ when at University together and remained firm friends and collaborators throughout their political and corporate careers.