In 1993 Victoria Rimmer from Buckley, North Wales developed vCJD. Her guardian Beryl was visited by a doctor from the Government-backed CJD Surveillance unit based in Edinburgh. The Doctor took notes and examined Vicky. Beryl was told by the doctor (Daily Mirror January 25th 1994) “that she should not make her granddaughter’s plight public as she should think of the economy and the Common Market”. With little support Beryl financed her beloved granddaughters illness until Vicky’s death, aged just 20 in 1997. Beryl lost her home and much of her savings and was forced to move to a house supplied by friends.

When Professor John Collinge proved that BSE could infect humans he was threatened and intimidated. He said “The problem was that people who stood up and said there might be a risk (to humans) were quite severely leant on”.
Consultant Microbiologist Dr Stephen Dealler was one of many Scientists sidelined for highlighting the serious implications to human well-being. In February 2008 he told me “It was well known at the time if you were going to look for bad information (e.g. signs of infectivity in the muscle of the cow for instance) then you simply would not get funded.” He added “I never applied for funding as I was told there was no chance of me ever getting any.”

In 1995, despite knowing about the tragic case of Victoria Rimmer, Prime Minister John Major was still assuring an increasingly worried public that “There was no scientific evidence that BSE could be transmitted to humans“, adding that BSE had been a “huge problem” for the beef industry. Major continued to argue that BSE posed no threat to human life. The Government’s response was unco-ordinated. Over 30 different pieces of legislation were enacted but never properly enforced. 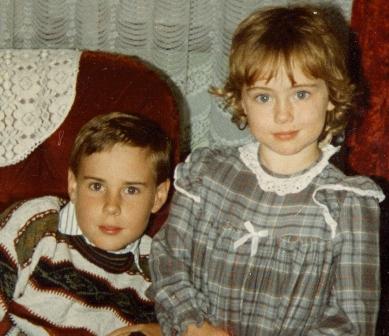 Andrew with his sister Emma

Michael O’Brien in the International Journal of Epidemiology wrote “UK Government allowed more than ten years to elapse after recognition of a new disease before formal efforts were made to integrate the work of all the agencies concerning the control of BSE“. Major told the Phillips Inquiry “As I had no scientific or medical background I relied on the independent experts to provide authoritative and reliable advice” Despite these protestations Major felt scientific and expert enough to endorse a dangerous Government policy repeatedly reassuring the public .Professor Roy Anderson (see John Gummer) was another expert whose significant research was rejected . MAFF told him “We have ample inside scientific support“ .During a lecture to the Royal Institution about BSE Professor Anderson said “ Alarm bells should have been ringing from the earliest days of BSE“ concluding “Government departments must be open not only to outside scientific research but also to the public. Scientists should always say “I don’t know the risks to humans” and similarly politicians should adopt the same precautionary stance which should be applied with vigour.”

With wide experience serving in Margaret Thatcher’s Cabinet , and as a father, you would have thought John Major would have repeatedly asked the questions which had reverberated around the UK since BSEs earliest days: “Is beef and its products one hundred percent safe for human consumption?” and “Is there no possible chance of BSE transmission to humans?” Apparently he did not. But as head of Government he must take responsibility. His administration repeatedly endorsed the false mantra that ‘beef and its products are safe’ something which was impossible to declare, and totally unfounded based on the evidence.

During the Thatcher and Major premierships at least 2 million infants and children were inoculated with vaccines that had serious risk of BSE contamination as they had been sourced from UK Cattle during the period when there was little regulation and BSE was entering the food and medicine chain unchecked. There are no records of the children who received vaccines produced between 1988 and 1989 ( I am still trying to ascertain documents) . These vaccines made by Wellcome and Smithkline contained bovine material.

When they were finally withdrawn, Liberal MP Norman Baker accused the Department of Health of being “potentially criminally – negligent” for allowing BSE risk vaccines to be administered to at least two million children. If I had know the risks of vaccines I would not have taken a very protesting Andy (who hated needles) to the baby clinic, his local GP surgery and at school given my permission for him to have those vaccines during the worst possible time for BSE contamination.

Like millions of other caring parents I did not have an informed choice, John Major and the other ministers involved in the cover up did have important information and therefore an informed choice of what to feed their families and children and whether to allow them to have vaccines. Dr Harash Narang who lost his job at the Government Health Laboratories for his persistent warnings about BSEs linkage to vCJD told the Phillips Inquiry “On many occasions in 1988 and subsequently I proposed at least random post-mortem testing of cattle but random BSE testing was then judged to be of low priority because MAFF considered that a visual examination of animals, noting overt symptoms of clinical cases before slaughter was adequate.”

With just a cursory look and inspection thousands of sub clinical cows (not showing obvious signs of illness) were consumed .Dr Narang told the Inquiry that he had obtained in 1995, 30 cattle heads from abattoirs in the Midlands. He said “I tested 28 Brains and established that 8 of the cattle tested which must have appeared healthy at slaughter, actually had BSE”. It was known that animals and humans had a long incubation period and that many so called healthy looking cattle could be sub clinical, symptom free but infectious. These cattle may well have been the ones that made up my Andy’s, baby food, school meals and vaccines leading to his horrific, untimely and avoidable death. 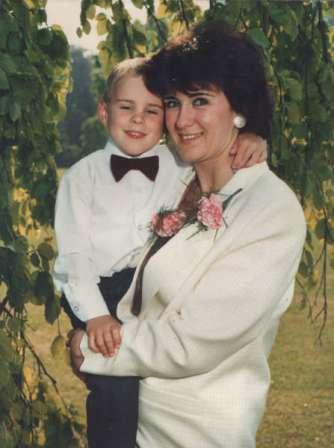 In 1989 when the toxic immunisations were produced Andy was 6, blonde, violet eyed and enjoying Sunday school.