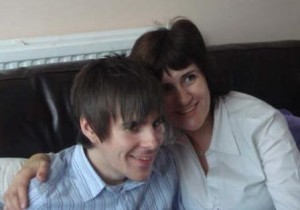 Christine and Andrew a few weeks before he died

A FINAL WORD FROM ANDREW’S MUM

The BSE scandal transmitted a terrible human tragedy – vCJD. It affects predominantly younger people, however it has also killed people as young as 12 years old and pensioners in their late 60’s. Many more cases of vCJD are not being recorded and are being mis diagnosed as dementia or age related disease.

VCJD is an horrific disease that has all the symptoms of every possible terminal illness you can imagine. Its agent, BSE, was given free-reign again and again to enter the food  and medicine chain. BSE has not gone away and continues to kill animals and people across the UK and globe.  Currently in the UK cattle are not tested for BSE but farmers are still being compensated for animals with BSE or ‘SUSPECTED’ of being infected with BSE. In October 2018 a cow dropped dead on a farm in Aberdeenshire, Scotland. The farmer had no idea the animal was ill. The cow was diagnosed with BSE. Silence remains over the other animals in the herd when and where they were slaughtered, also cows in the recent past which had already entered the human food chain. With upwards a 50 year incubation period in humans, its a ticking time-bomb within all our communities.

Thousands of people have been killed or disabled by the ‘ticking health time-bomb’ which is the human form of mad cows disease.  Millions of us have been exposed and could develop the disease in the coming decades.

The Health Protection Agency research stated that ‘1 in 2,000 of the UK population now carry or are incubating vcjd’. (December 2012 The Lancet Infectious Diseases, Volume 12, Issue 12 Page 897) With incubation periods of upwards of 50 years millions of us remain at ‘risk’ of dying like my Andrew.

In 2015  four people died of human BSE in the same region in Italy, media was kept to a minimal and the families were intimidated by local authorities to ‘keep quiet’.

The  human form of mad cow disease remains a UK and global deadly health issue. We face a pandemic of dementia across the globe many experts believe that cases of vCJD ARE BEING MIS DIAGNOSED AS DEMENTIA.

The latest research from the Prion Conference 2017 shows that  the skin of patients with CJD contains transmissible prions and seeding prions  that cause the human form of BSE.  These are some of the world experts that conducted this research. Dr. Wenguan Zou1, Dr. Christina Orru2, Jue Yuan1, Brian Appleby.

Latest research  (2017) by Scientists in North America have found that the deadly rogue prions that cause mad cow disease and human BSE can remain in the ground and within plants for at least 16 years. Which means animals who have been infected with BSE and graze on fields that are then used for farming vegetables and produce for the human and animal food chains.

Thousands  of people live with an ‘at risk status of developing vCJD’ due to blood/blood products and medical procedures. Millions of us in the UK have been exposed to BSE, even strict veggies have eaten at least 50 BSE infected meals. Hindus, Sikhs and strict veggies have died of vCJD.

Andrew as a baby and Christine

The Department of Health official statistics regarding the numbers of people who have died of vCJD are being manipulated to
falsely reassure that the disease has gone away. Since Andrew died I have and continue to meet, film, and interview victims of vCJD, in the Uk and abroad, many of these victims never appear on any official records or statistics. During my ongoing investigations I have been repeatedly blocked ignored, intimidated and bullied…..why? if there is nothing to hide?

The establishment says no-one is to blame for the BSE scandal or the horror of vCJD. It says there are no culprits or guilty parties, no-one to take responsibility, but vCJD didn’t just happen like some terrible natural disaster. It was man-made, manufactured in the UK and more importantly, it was allowed to grow and flourish. Time and again those I name and shame on this website knew the deadly dangers to human health but put their careers, government policy and the huge profits made by agriculture/pharmaceutical and food corporations before my young son’s life and health, before you and your family’s well-being.

vCJD is still portrayed as something unforeseeable and unpreventable instead of an avoidable, preventable disease. If the Government and officials had not passed the buck, not remained silent, not ignored evidence, not withheld crucial information, then hundreds of innocent victims of vCJD ( the youngest just 12 years old)  would  still be alive and the desperate victims that continue to battle vCJD would not be devastatingly impaired and disabled.

WAS HIS BABY FOOD SAFE?  Baby food was produced from cattle dying/infected with BSE

WAS HIS VACCINES SAFE? Vaccines derived from BSE infected herds vaccinated millions of children across the UK and globe during the 1980s/1990s and beyond. (see whats to blame?)

My son had a terrible, noisy and distressing death. For four long days and nights I held my son as he fought to stay alive. Although Andy’s brain had been systematically destroyed by vCJD, his 24-year-old body refused to give up. His heart was strong. I held him as his lungs tried to suck in every last gasp. His body didn’t want to die. It was in perpetual motion as his chest and diaphragm tried to force air in. His rasping and deafening breaths filled every corner of my bedroom and this horror, despite morphine, went on for four days and nights. Even though I held him tightly, rocking him back and forth as I did when he was a baby, the metal bed that had become his home shook with the power of his young body refusing to give up or let go. Young people who die of vCJD do not go peacefully  to their deaths,  their dying is  horrific and painful as they are not ready to die.

My beloved, beautiful, gentle, kind boy was reduced to a shell. He was blind, deaf, quadriplegic, unable to recognise or remember anything or anyone. Those last images of my Andy are burned on my soul and broken heart.

Many men and women are responsible for what happened to my son. All have escaped judgement. The culprits are named and shamed on this website. Despite many media reports about these Ministers and Government officials’ corruption and lies, there has  so far been no public-accountability. No-one has lost their job. No-one has lost their status. No-one has lost their reputation. No one has lost their freedom.  in September 2015 Douglas Hogg one of the architects  of human BSE, ( see his profile)  has just been made a peer in the House of Lords. John Gummer has also taken his place in the House of Lords (see profile) and he now travels the world as a highly paid Consultant REGARDING ‘GREEN AND ENVIRONMENTAL ISSUES’  This is the man that said ‘BSE IN BRITISH BEEF WAS NO THREAT TO HUMAN LIFE’. Gummer was Agriculture Minister throughout BSE and now is an highly paid consultant for Prosper De Mulder the same company who was at the heart of the BSE infected animal feed and food produced for humans which provided meals for  school, hospital and university canteens. Including my son Andrew’s school and college!

My son lost at least 50 years of life and love. As a mother who has had her only son unlawfully killed by vCJD I continue to pursue those responsible so that they face criminal proceedings. All families affected by vCJD demand a criminal investigation and for those culpable to be imprisoned. When the likes of John Gummer, Kenneth Clarke,  Margaret Thatcher culpable for my only sons unlawful death,  were deliberately putting the UK public’s lives at risk to increase share-holders profits and expand their political and economic policies they didn’t know how many millions could die of vCJD. They used the whole of the UK population as an experiment whilst making sure top scientists and their own families were protected from BSE. Over 150 UK children under the age of 10 have lost a mother or father to vCJD.

Thousands more children under the age of 16 were put ‘at risk’ of developing vCJD due to receiving contaminated blood products sourced from blood donors that have died of vCJD. One child born to a mother dying of vCJD is totally disabled due to the disease and cared for by her grandmother, three other children have been born to mothers in the terminal stages of vCJD. This little girl has and never will appear on any ‘Official’ government statistics for vcjd. There are many children who were born to mothers in the death throes of vcjd human mad cow disease.

The list of victims and potential victims of vCJD are tens of thousands.Andy could be any mothers son, anyones partner, brother, grandchild, unfortunately in the months and years to come there will be more Andrews whose lives will be cruelly stolen by vCJD. Eight years ago  my son Andy died of vCJD. Next week, next month,next year it could be your family member or even you……

Since Andrew died I have sat with many young people at various stages of the disease, dying but their voices not heard and their families intimidated to keep quiet and not let on just how many people are and continue to be affected by the human form of mad cow disease. This is not only a UK cover-up but world wide corruption, as I have travelled across the world meeting families from all cultures and backgrounds who have lost a loved one to this deadly disease.

Please join me in my continuing campaign to get justice for my son Andy’s avoidable and untimely death. Help me to protect your family and children. When Andrew was dying he asked me ‘ Find out who did this to me mum and expose them’. Always thinking of others he said ‘ This must never happen again’. I continue to honour those promises to my dying son and will do so with my dying breath.

Thank you for supporting me during what has been the worst of times – Christine x.